The first mentioning of Svirzh village is inseparablyconnected with the Svirzhskifamily and is dated back to 1530, although year 1484 is mentioned on the memorial sign on the castle’s building.
Living houses and outbuildings, well, three-tiered towers, wooden bridges and dungeons, fireplaces and slaughterhouse are building upSvirzhcastle complex. At the entrance to the castle the family coat of arms is still quite visible.Svirzhpalace could hardly have a defensive value in spite ofit’s good position – it was surrounded by impassable swamps, ponds, and drawbridge.
On the territory of the castle’s park the Renaissance cathedral of XV century is remained. It was built on the place of the old wooden church, and if you seek well, among the bushes and trees near the castle, you may find some remains of an old watchtower. This castle has a quite tangled history, as it was often passing through the hands of variousowners.
In the middle of the XVII century castle’s building was renewed and strengthened: Svirzh then passed into the ownership of count OleksandrTsetner. There is an assumption that PawełGrodzicki, anarchitect known as the creator of Lviv Royal Arsenal, was engagedinto the process of reconstructionof Svirzh castle. IhnatsiyTsetner was the last family owner of the Svirzh castle. He was a botanist and the founder of Tsetnerivka Park, which is now known as a Botanic Garden of Lviv National University named after Ivan Franko.
XXth century was a hard time for Svirzh castle. During WW1 and WW2, it’s owners have been changing rapidly. The biggest destruction to Svizh castlethoughwasbrought by WW1: wooden ceiling overlapping and a rich library were totally destroyed. However in year 1926 earl Robert who was the castle’s owner during this period restored the castle, but with the establishment of Soviet authorities in 1939 Svirzh castle became a public one and begun to decline.
Up to 1975 castle was practically ruined, but in 1975 Ukrainian architect AndriyShulyarinitiated the reconstructions which lasted there till 1983.

Svirzh castle is a well-known movie star as some episodes of “d'Artagnan and Three Musketeers” (soviet movie, year 1978) were filmed here.
Nowadays Svirzh castle is under going another stage of reconstruction, so during your visit to this wonderful place you may see lots of ancient and renewed, mysterious and capturing things. 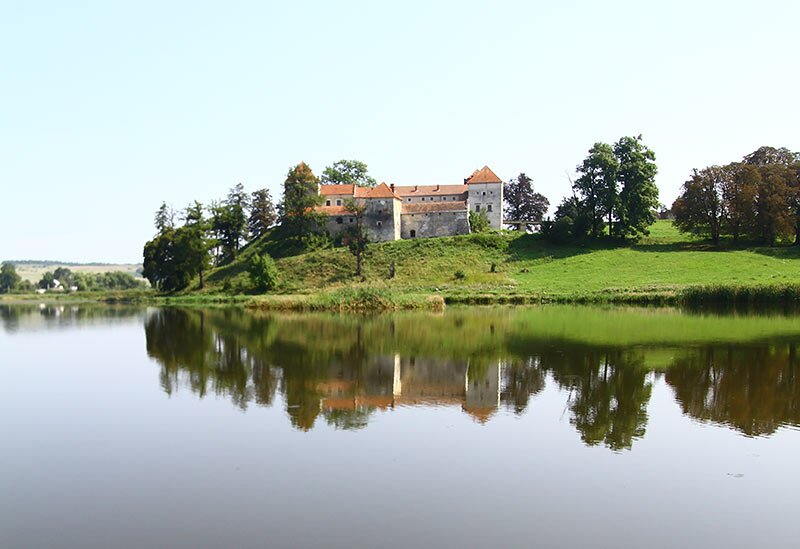