Pidlyssia is a small village, the hometown of a prominent Ukrainian writer in Galicia, Markiyan Shashkevych (1811-1843). Now his house is a frequently visited museum. However, the most celebrated of the wooden buildings in this area is the Church of Transfiguration. (1735).
The first mention about Olesko as a defensive centre with a castle can be found in 1327. But the earliest settlements date back to 2-1 millennium BC.  A high hill among swamps is presumed to be an outpost of old Plisneska in 13th century. The town’s history is closely related to the history of its castle. The Olesko Castle’s geographical location is representative of a struggle for Ukrainian land between Lithuania, Poland and Hungary.  In the 14th century the castle had many owners and at the end of that time it was captured by Lithuanian Prince Liubartas after many bloody battles and conflicts. Here in Oles’ko Castle the rebel garrison resisted the army of Polish King Jogaila during an anti-Polish uprising in Galicia led by Ivashko-Bohdan Presluzhych from Rohatyn (a city located on the Hnyla Lypa River in the Ivano-Frankivsk region).
However, after a long siege period the Polish seized the castle and handed it over to John from Sienna for life. During the late 15th - early 16th centuries the castle was damaged by Turkish-Tatar invasions. But it was soon restored and a new city began to develop.
In 1545 the owners of Oles’ko built the St. Trinity Church with a belfry in the city. It had both religious and defensive significance. Now the Church belongs to UAOCh (Ukrainian Autocephalous Orthodox Church).
After the Polish–Lithuanian Empire grew stronger, Oles’ko was a noble residence and lost its strategic importance.  In 1605 the Ruthenian magnate Ivan Danylovych became the owner of Oles’ko castle with all its surroundings. The castle gained the features of a real house from the Italian renaissance. Future kings of Poland John III Sobieski and Michał Korybut Wiśniowiecki were born here in the castle. The father of Bohdan Hhmelnytskyi Mykhailo Khmel worked for Ivan Danylovych. According to some stories the future hetman was born in Oles’k. During Danylovych’s rule as Chyhyryn village elder, Mykhailo Khmelnytskyi was his right hand man. Later the whole  Khmelnytskyi family moved to Subotiv hamlet.
In 1681 John III Sobieski became the owner of the castle and began the building’s and park’s renovations under the control of his wife, Marie Casimire. Very soon the estate was bought by Stanislaw  Rzewuski and his son Seweryn Rzewuski.  In 1739 they created a monastery of the Capuchin order. The St Jehoshaphat Church with spacious monastic cells, refectory and kitchen were built. Lviv Art Gallery repository is here now.
During the 19th century the castle suffered from disasters such as fires and earthquakes. Austria-Hungary rule over the castle resulted in its virtual destruction. The Polish community tried to establish the museum of John III Sobieski, but instead, and until 1939, it served as a women's agricultural school. During the Second World War the castle was used for military stores. In the territory of Capuchin monastery was a concentration camp and ghetto.
You will be fascinated by the unique collections of old wooden culture, furniture, striking tapestries and paintings in the renovated castle. 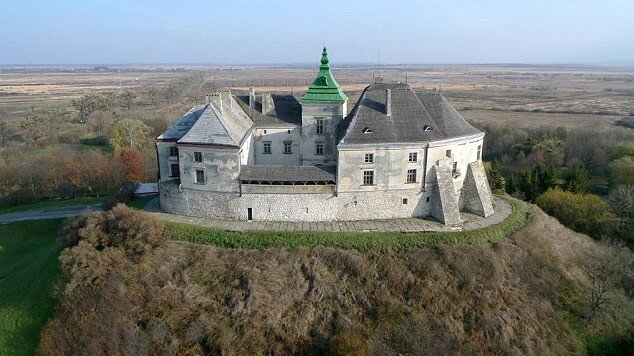 On Voroniaky slopes the village of Pidhirtsi is located at a height of 403 m above sea level. It is well-known for its Plisnesko settlement, Pidhirtsi Castle, Basilian monastery,  miraculous source and Theotokos of Pidhirtsi.
The area of Pidhirtsi has always attracted people. Between the 7th and 14th centuries on one hill stood a fortified settlement Plisnesko. It is mentioned under different names in the chronicles of 1188 and 1233 and in the Tale of Igor's Campaign. Old city remains are preserved on a 160 hectare site of the ancient settlement, surrounded by a system of earthen ramparts and ditches with a total length of about 7 km. It is the largest and the best monument of Russ fortifications.
A monastery is located in nearby Pisnesk. According to legend the monastery was founded here in 1180 by the Prince of Belz Vsevolod’s daughter – Olena. St. Onuphrius Church with a facade with volutes – native to baroque – appeared in 1726-1750 through the efforts of hegumen  Parfenii Lomykovskyi.
The Palace in Pidhirtsi was built in the late Renaissance style on the order of the most capable military commander in the history of the Polish-Lithuanian Commonwealth, Crown Hetman Stanisław Koniecpolski. The history of Pidhirtsi begins from the moment when the King Vladyslav Varenchyk decreed that possession of the town should go to Yanush Podhoretskyi.  Stanisław Koniecpolski was charmed by the place and decided to buy the whole region.  In 1637 the Hetman began to build his residence.
Three generations of Koniecpolskis made great efforts to renovate their monumental partimonial estate. It is believed that a big marble castle in Pidhirtsi was built by the French engineer Guillaume  de Beauplan in 17th century.
A two-storeied palace was built by the Italian Andrea dell'Aqua. During the Khmelnytskyi period the castle was partially destroyed. At the end of the 17th century it was repaired and internally reconstructed. In 1682 the younger Stanisław Koniecpolski decided to add all his lands of Brody and Pidhirtsi to a legacy for the king James  Sobieski. In factl the younger son of Johan III - Konstanty  Sobieski -  became the heritage owner. In 1720 the palace was sold to Rzewuski magnates. Wacław Rzewuski collected in the palace valuable paintings, books, weapons, furniture. Moreover, he brought here every important and expensive item from Olesko castle.  The palace was often full of noisy fun – fireworks, military parades and cannon volleys  for all the neighbouring gentry. In spite of the fact that the palace was surrounded by ramparts and ditches, had bastion fortifications and its own arsenal, it wasn’t a serious defensive point but the ceremonial magnates’ residence with fortifications which instead served as decorations.
In addition this residence included an entrance gate, the church and a surrounding park complete with fountain and outbuildings.
St. Joseph Church  was built on the order of Wacław Rzewuski (according to some sources, he was the project designer as well) as an ancestral shrine in 1752-1766.  Carol Romanus was its architect. The church is in a baroque rotunda shape and is 12 meters in diameter.
A beautiful park enclosed the castle – one of the first examples of an Italian park with terrace in Ukraine. Three garden terraces was the architectural composition’s basis of its northern side. The castle was located on the first terrace which had stone balustrades at the end. The middle terrace was the central part of the  garden. It was rectangular and the size of a football field. The required attribute in "Italian" park is parterre: the composition of eight identical square flowerbeds separated by paths. It is still possible to see traces of the park’s planning.   In the 17th century, to cater for many guests and their servants a new tavern was built near the castle which is still preserved today.
The last owners of Pidhirtsi before the World War II were the Sangushkiv Family. Prince Roman Sangushko, having experienced The First World War, anticipated the threat of a further war and immediately removed the most valuable artworks. A caravan of trucks reached Romania  at the last moment before the Germans attacked and soon moved further afield to Brasilia. With the Soviet occupation in September 1939, the museum was closed. The statues were brought to Leningrad (Saint Petersburg now),  to the Summer garden. The palace was considerably damaged by occupying German and Soviet garrisons. A major fire in 1956 completely destroyed the palace interior. Despite this, it was repaired but both the painted ceilings and marble floors could not be restored. Soon afterwards, the palace served as a sanatorium for tuberculosis patients. Since 1997 it has been part of Lviv Art Gallery. 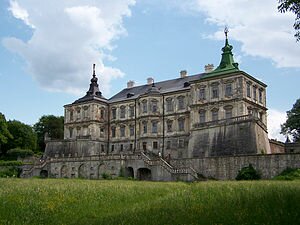 
Brody town is located in the northeast of the Lviv region, almost on the border of the Lviv and Rivne regions that is the actual border between Galicia and Volhynia. Before 1569 it was the former border between the Polish Kingdom and the Grand Duchy of Lithuania. Between 1772 and1918 it separated the Austrian and Russian Empires.
This ancient settlement was located on an important road which extended along Galych, Zvenyhorod, Plisnesk (a big city in the Kingdom of Galicia–Volhynia) and then Volodymyr and Kyiv. Two rivers with swampy terrain lay near the town and it was possible to wade across them. The existing settlement  in Stari Brody from Kievan Rus’ times was first mentioned in Tale of Bygone Years
Brody has a chronology that dates back to 1084. In 1241 Brody and its surroundings were devastated by the Mongolian Tatar invasion led by Batu Khan. Since 15th century Brody has been under the rule of the Polish magnates Kamienieckih. From 1580 it belonged to Zholkevskih family, from 1629 – Koniecpolskyh, from 1682 – Sobieskih, 1704 – Potockih family. The heraldic symbol of the Potocki family – five-shoulders cross on sky-blue background - was the town’s coat of arms. It was the symbol of the Austrian period also. In 1584 Magdeburg rights was granted to Brody and it received city status.
In 1630-1635 Brody has been the fortress built on samples of the new Dutch art of fortification. It’s quite possible that Guillaume de Beauplan assisted in its design. The fortress was located on the west part of the city. It was surrounded by marshes and ponds offering it protection from the other sides of the city. According to the project, the fortress looked like a pentagon surrounded by a deep moat. Fortifications included five bastions and a curtain with casemates.
With Ukrainian support, in September 1648 Brody fortress suffered an 8 week siege from Bohdan Khmelnytskyi troops led by colonel Nebaba, Nechai, Holovach.
The grandson of  Hetman Koniecpolski granted Brody as heritage to Jakub Sobieski who then once sold it to the Potocki family in 1704. In the mid 18th century Stanislaw Potocki rebuilt it for his residence in baroque style.  In 1812 Wintsent Potocki under Austrian government command dismantled the fortification together with a tower over the gate, two bastions and ravelin.
In around 1833 John Kazimesh Molodetski bought Brody and from then until 1939 his granddaughter Jadwiga - the wife of Adam Ryzhshchevsk – was the owner of the palace. The palace is preserved nowadays in the centre of the castle yard. The fortress is on Shkilna street and attached to the local market so is a little neglected.
The other monuments worth visiting are the Theotokos church of the 18th century, the Church of the Holy Spirit, St. George’s church and the defensive synagogue remains of 1742. There are also some eclectic buildings  in the secession style from the Austrian period that was the most favorable for a blossoming in city development.
In 1772, after the first partition of Poland, Brody region became part of Austria. Brody had a border with the Russian empire and received the status of free trade city. It was called a trade store of European and Asian countries. Cross-border trade was the main business of the residents. In the early 19th century the population reached 20 000 people, most of them Jews. At that time Brody was the third largest city in Galicia (after Lviv and Krakiv).
But once the railway was constructed in 1872 Brody lost its importance as a centre of border trade A new line through Radyvyliv connected the railway to the rest of the Russian Empire and, after the First World War, Brody began to decline. 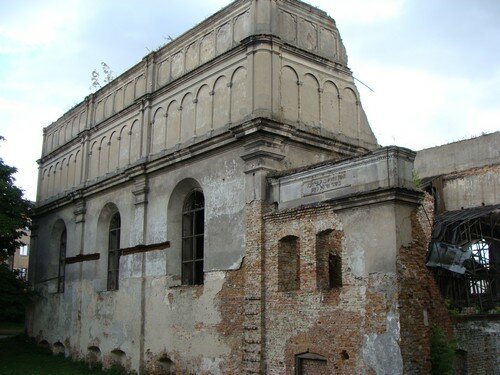