The 1st in Lviv

The 1st park in Ukraine

The oldest park of Ukraine was created in the second half of the XVI century – the Jesuit Park, now called Ivan Franko Park.
Four hundred years ago, municipal fields stretched across this area; some time later, this land fell into private hands. At the end of the XVI century, a wealthy Lviv citizen called Jan Scholz – Wolfowich spent 1,600 gold pieces to lay out plans for this park. Sometime later, he gave his daughter’s hand in marriage to Antonio Massari, the Italian Consul of the Venetian Republic in Lviv, and the ownership of the park was transferred to his son-in-law. Massari re-arranged the park according to the popular Italian style. In 1855, the park was returned to the city, and thus became one of the oldest municipal parks in Eastern Europe. 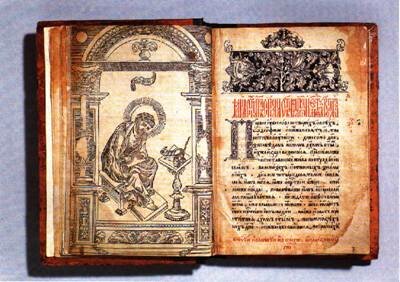 The 1st printed book in Ukraine

In 1574, Ivan Fedorov published “Apostol” (The Apostle), the first book printed in Ukraine.
The printing pioneer, Ivan Fedorov was banished from Muscovy by reactionary clergymen. He made his way to the “peace-loving city of Lviv”, where he founded his own printing house and, with the help of ordinary Lviv citizens, published a book called “Diyannia ta Poslannia Sviatykh Apostoliv” (Deeds and Epistles of the Holy Apostles). This first Ukrainian book is a remarkable work of art, notable for its large size, variety, and artistic and polygraphic representations. One thousand two hundred copies of the “Apostol” were printed, quite a large number for that period. Close to 100 copies have been preserved in major libraries to the present day, some in Ukraine, Russia, Poland, Bulgaria, the USA, and many other countries. 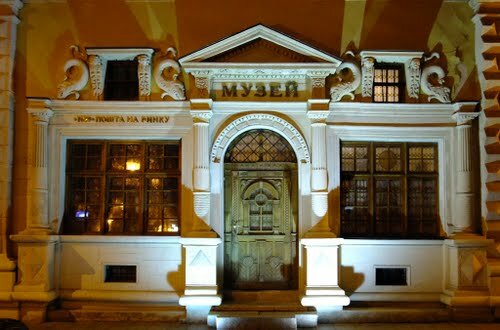 In 1629, the Italian, Roberto Bandinelli, opened the first European-style post office in Ukraine. The postal services regularly delivered letters to the city residents from all corners of Europe.
The Polish king, Sigismund III gave the Italian exclusive rights to receive regular royal letters, and he also endowed him with the title, “The Royal Postmaster”. Every Saturday, Lvivers could send and receive letters from all over Europe, but these services were very expensive. In those days, paper was very thick and heavy, so that correspondence weighing only 6 grams and destined to Gdansk, was equal to the daily salary of a qualified craftsman. 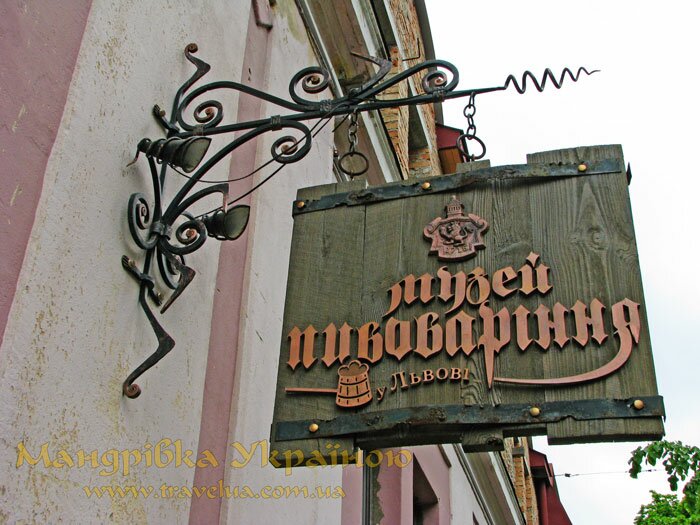 The 1st brewery in Ukraine

The first brewery of Ukraine opened its doors in 1715.
Beer has been brewed in Lviv since immemorial time. The first mention of these breweries dates back to 1425. In the second half of the seventeenth century, County Stanislav Potocki issued a decree, whereby the Jesuit monks, who had settled on his property some time ago, were named owners of a large plot of land. The County also expressed the wish that they should build a brewery on this land so that “the beer would be their own and good-tasting”. As a result, the first industrial brewery of Ukraine opened in the Klepariv district in 1715. The quality of the Lviv-brewed beer was strictly controlled by the Jesuit priests, and it quickly gained popularity in the region and in distant countries of Central Europe. The 1st university in Ukraine

The first university in Ukraine, the Jesuit Academy, was founded in 1661.
According to the Treaty of Hadiach signed between Poland and Ukraine in 1658, two Orthodox universities (academies) were to be created in Ukraine. One of them was to be situated in Kyiv, and the second in Lviv. Higher educational institutions of other denominations were not allowed to open in these cities, and so, the Jesuit College was to be closed down. The Jesuits clearly understood the consequences of such a decision, and demanded that their college should be recognized as a university. King Jan Kazimir signed the final decree on January 20th, 1661. This date is considered to mark the founding of the Lviv University.

The 1st newspaper in Ukraine 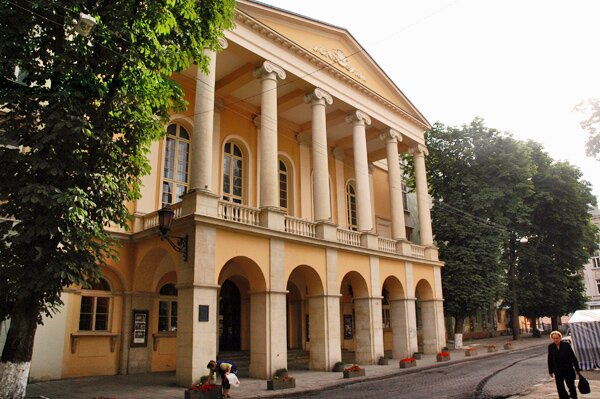 The 1st municipal theatre in Ukraine

The first permanent municipal theater was founded in Lviv in 1776.
The first professional theater was officially opened in 1776. The German theater company was managed by Franz Gettersdorf, and included actors and singers, a small choir, and orchestra. The Company staged all kinds of theatrical genres: operas, operettas, comedies, pantomimes, and ballets. The actors took possession of a reconstructed theater, which had formerly been a Roman Catholic Church belonging to the Franciscan Monastery, and had been abolished by a decree issued by Kaiser Joseph II. It was situated in Teatralna Street not far from the present-day Secondary School No. 62. The creative center of theatrical life remained in this building until 1843, when the Skarbivsky Theater was built. It is now known as the Maria Zankovetska Theater. 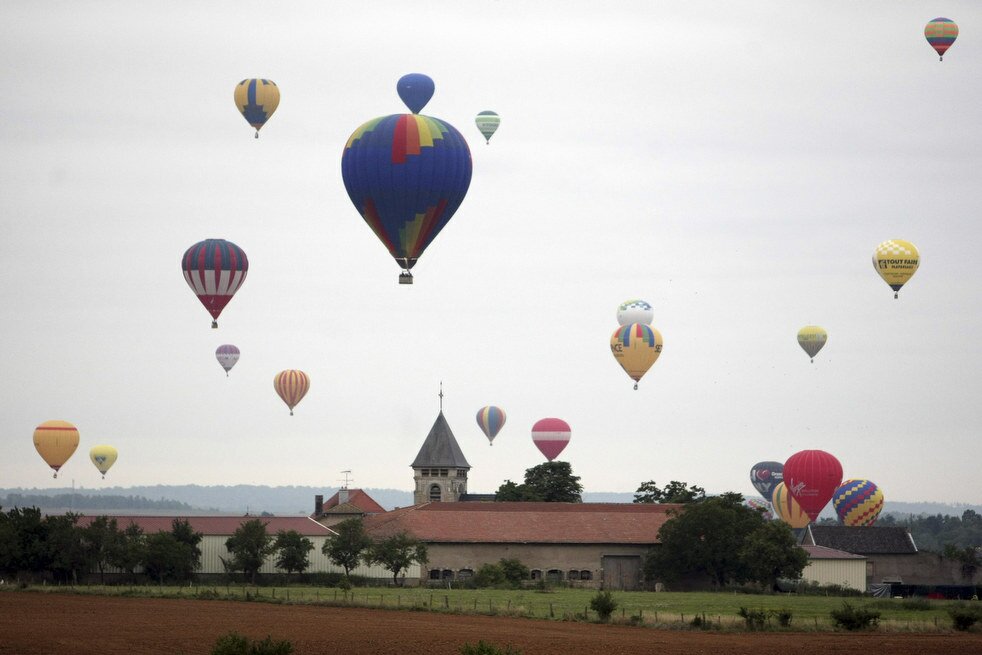 The 1st hot air baloon in the world 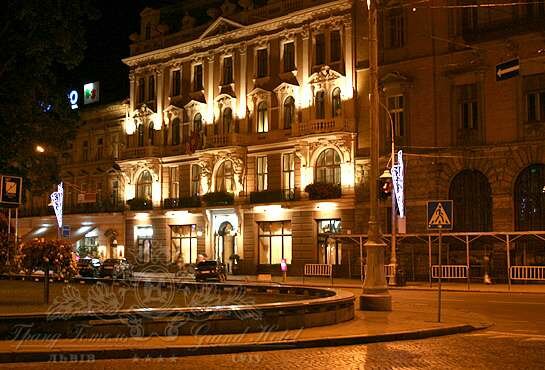 The 1st hotel in Ukraine

The first hotel in Ukraine, “Pid Rymskym Tsezarem” (At the Roman Ceasar’s) was opened in 1785.
In 1785, a Lviv entrepreneur, Johann Preshel, erected a three-storey building on Prospekt Svobody. It housed the first Lviv hotel called “Pid Rymskym Tsezarem”, and, at present,it is home to the Museum of Ethnography. Bricks were collected from the dismantled Holy Spirit Hospital (located on present-day Ivan Pidkova Square), and used to complete the construction of the hotel. At the beginning of the XIX century, the hotel was considered to be one of the most imposing stone constructions on the Lower Ramparts, just after the Governer’s Office and Residence. 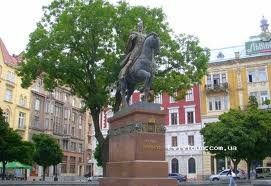 The 1st monument in Ukraine

The first monument dedicated to the Polish Hetman (chieftain), Stanislav Yablonovski, was erected in Lviv at the beginning of the XVIII century.
Yablonski defended Lviv during the lst Tatar attack in 1695.
The monument was relocated close to the present-day National Museum on Prospekt Svobody in the middle of the XIX century. Then, people started calling this street Valamy Hetmanskymy (Ramparts of the Chieftains). In the 1930ies, the monument was again relocated in the Jesuit Roman Catholic Church on Trybunalska Square. It disappeared in 1944, when the Red Army invaded Lviv. 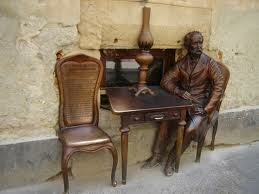 The 1st kerosene lamp in the world 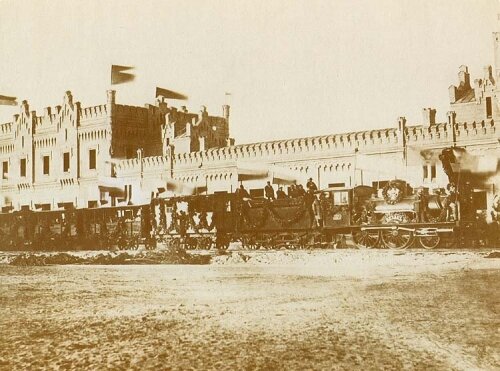 The 1st railway in Ukraine

The first railway in Ukraine, Lviv – Peremyshl was built in 1861.
In 1859, the first railway tracks were laid from Peremyshl to Lviv, a distance of 97.6 km. The Lviv railway station was completed in October, 1861. It was meant to be the hub for trains departing in 4 different directions: to Krakow, Chernivtsi, Brody, and Pidvolochysk. The first passenger train arrived in Lviv from Peremyshl at 14:30 on November 4th, 1861. The train stopped at different stations, such as, Medyka, Mostyska, Sudova Vyshnia, and Mshana, where it was met by hundreds of curious local farmers. Municipal bands duly celebrated the arrival of the “iron horse”. 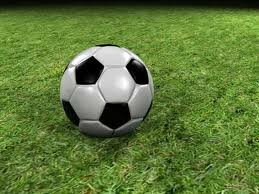 The 1st football match in Ukraine

The first football game in Ukrainian history took place on July 14th, 1894.
In 1894, a British-style stadium composed of a football field and 7,000 seats was completed on the territory of present-day Stryisky Park. On July 14th, 1894, an important event in the history of Ukrainian football occurred in the same stadium – the first football game was played between the Lviv and Krakow municipal teams of Sokil association. The newspaper, “Gazeta Lwowska” reported that the Lviv players wore grey gym shorts and white sport shirts, whereas the footballers from Krakow played in blue shorts and white sport shirts. Volodymyr Khomytsky, a student at the Lviv Pedagogical University, scored a goal in the sixth minute of the game. 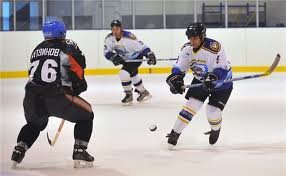 The 1st hockey match in Ukraine

Lviv Assumption Stavropigion Orthodox Fraternity (1540) was fraternity, national, religious non-government organization of Lviv Orthodox citizens from 80s of 16th century to 1788. The statute of Lviv Fraternity set the right of dominion over other fraternities and control over priesthood including bishops. Soon Lviv fraternity got the right of Stavropigion meaning insubordination to local Orthodox bishops. Afterwards the statute of Lviv fraternity became a model for a number of Orthodox fraternities in the Western and Right-bank Ukraine. The fraternity organized a hospital in Lviv for disabled people and provided financial aid to their poor fraternity members. In 1788 Austrian government dissolved Lviv fraternity. 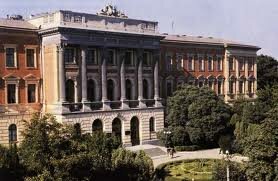 “Lviv Polytechnic University” is one of the oldest technical schools and the first on Ukrainian land. It was opened as a Technical academy in November 4, 1844 and its first president was   0held in European countries. The project preparation of the new Academy was delegated to Julian Zachariewicz, who later became its president (November 14, 1877). The construction of Academy lasted for 3 years. In 1877 the Technical Academy was renamed into Polytechnic school with technical university rights of Austrian-Hungarian Empire. It became a part of European technical science. Students from Russia, Germany, Romania, France, Turkey and other countries studied there. 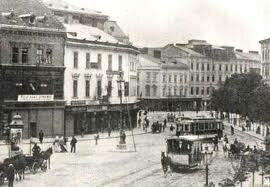 The subject about using a horse tram in Lviv for the first time arose at the end of 1860s. In 1878 when it turned out that the city couldn’t exist without public transport, the city council announced competitive tendering for construction tram lines. A committee preferred Trieste tramway society, and the agreement was signed in February 1, 1879. In May 21 the plan of the construction was approved.  A test drive was held in November 25, 1879.
The first Ukrainian horse tram was opened in Lviv in May 3, 1880. Since May 5 the fare was introduced. There were two lines running across the city ("the main railway station - Horodotska Street - Mytna Square" and "the main railway station - Pidzamche") which transported approximately 1,867,000 passengers per year.
In 1889 there were 105 horses and 37 passenger and 3 freight tramcars produced in Austrian city Graz. The average speed was 6.4 km/h. The lines were oaken. The line width was - 1000 mm and the staff consisted of 70 persons. 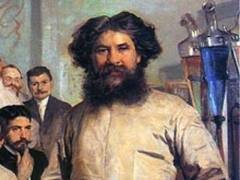 The 1st successful surgery on stomach ulcer in the world (1881)

The surgery was held by Ludwik Anton Rydygier – Polish doctor, surgeon, professor, Doctor of Medicine, head of department of surgery (1879 – 1919), dean of Medical Faculty (1898 – 1899, 1911 – 1912), rector of Lviv University (1901 – 1902), founder of Lviv surgery school. Rydygier was one of the most prominent world surgeons, an author of 200 scientific works and new treatment methods. Some his treatment methods of surgery on stomach, rectum cancer, amputation, cardiac-surgical, orthopedic, urological and plastic surgical interferences are being put into practice till now. 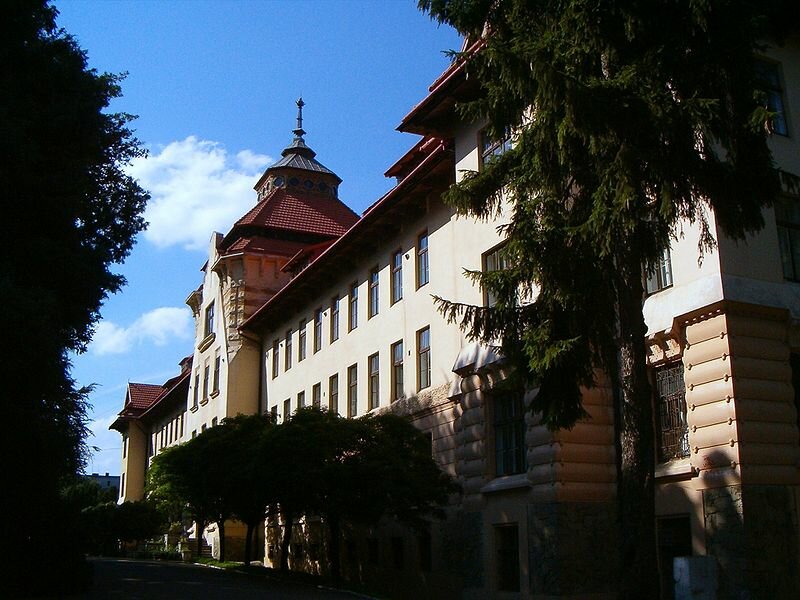 The 1st ferroconcrete bridge in Europe (1892)

The firm of Ivan Levynskyi was the first which applied ferroconcrete constructions in building. (Lviv Opera House, The main railway station).