Univ is situated not far away from Peremyshliany village. This countryside is an owner of one of the greatest Christian shrines in Galicia - Univ Holy DormitionLavra of the Studite Rite. In archived documents dated back to XVI century Univ is mentioned as well-known spiritual center of Galicia, however the exact date of its foundation is still unknown. Till the middle of XV century the Hedyminovych family was taking care after the monastery, and laterLahodovski family.
During the Tatarinvasionsin 1549 monasterywasruined. In the same year Alexander VankoLahodovski became a custodian of the monastery. According to the legend Alexander saw a Virgin Mary in his dream when he was seriously ill, and she told him about the healing spring in the forest which he ought to find.  Soon afterhe made a wove to rebuild the monastery in the honor of Virgin Mary. During the 1549-1574 a church around this healing spring was built by this nobleman. The original gravestone of A. Lahodovski, which is one of the best examples of Renaissance Western Ukrainian sculpture, is preserved till our days and kept inOlesko Castle.
Church of the Assumption of the Holy Virgin is a dominant building of a monastery ensemble. The monastery is stored Univ Miraculous Icon of the Virgin Mary, a piece of  a Holy Cross, particles from the tomb of the Jesus Christ, the particles from the tomb of the Holy Virgin Mary and relics of saints.
In 1606 Ivan Vyshnevetskyy wrote here his famous «Poslaniye do starytsiDominikaniyi» (“A Later to the Old Dominikaniya”). During the 1648 – 1770 typography operated in the monastery building, in which a number of well-known early printed books were published. A. Skolskyy, D. Kulchytskyy, S. Stavnytskyy and other famous publishers worked here, books printed in this typography were decorated with the engravings made by Zubrytsky M., E. Zavadovskiy, M. Futlevycha.
Female monastery earlier settled on Chernecha hill apart from the building of a male monastery, but it was destroyed in 1763. Nowadays a monk’s cemetery is located on Chernecha hill.
Univmonastery underwent many changes throughout its history, but the greatest flourishing of monastery inseparably connected with Sheptytsky family. AtanasiySheptytsky restored the building of a monastery and church, he regained the typography in which more than 60 books and printed works were published. However the monastery was closed after the establishment of Austrian authority. The Metropolitan MykhajloLevitskyrebuilt the monastery into his residence to keep it from a total ruination, and soon after a magnificent castle appeared there. In honor of Metropolitan MykhajloLevitsky a memorial sign was installed here with an inscription “1836-1898” on it.
Andrey Sheptytsky became a person who brought the second life to Univ monastery.  After a while A. Sheptytsky gave to Univ monastery status of Lavra. An orphanage was opened at the monastery building, a huge library collection was formed and even the icon painting workshop functioned here. The development of UnivLavra stopped with the establishment of a Soviet rule and arrest of archimandrite Klymentiy. Soon after, in the monastery’s building psycho-neurological asylum was opened. Nevertheless, after the establishment of Independence of Ukraine Univ monastery revived.
Nowadays near by the monastery we can see a wooden church, which was constructed in 2007 according to the project of Roman Sulyk, an architect who create a church for the monastery in Zarvanytsia as well.
At a presentUniv Holy DormitionLavra of the Studite Rite– it’s one of the biggest pilgrimage centers in Western Ukraine. Since 1994,student society “Obnova” and Maltese Cross Corps organized atwo-day pilgrimage to UnivLavra for youth. 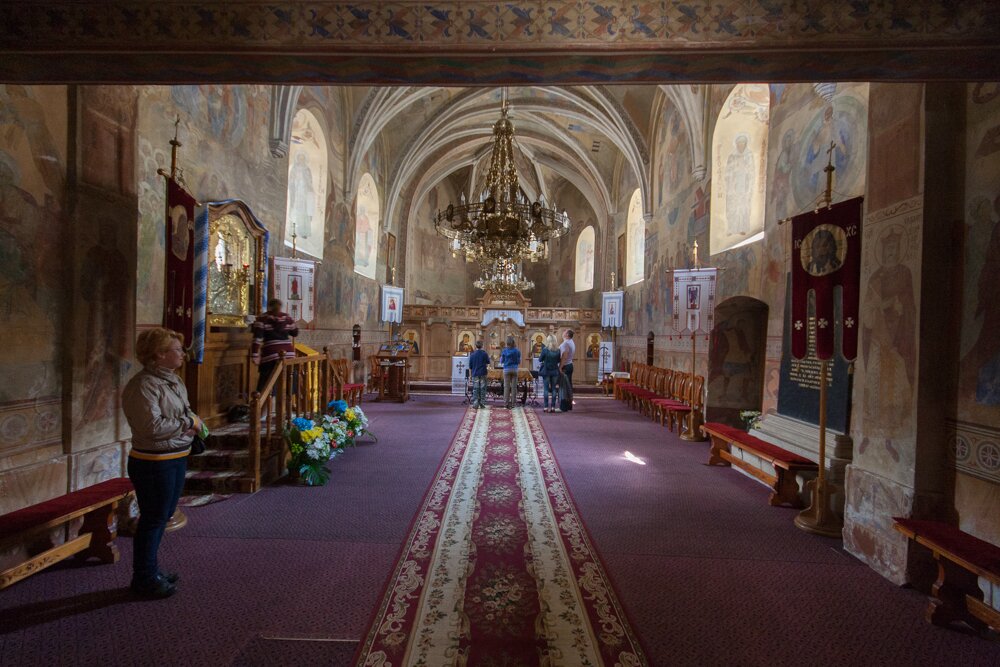